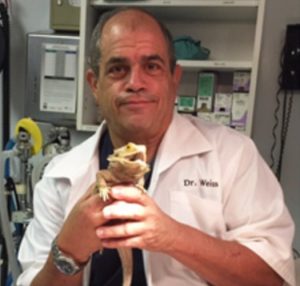 Schedule an appointment with Dr. Weiss

Dr. Michael Weiss is a 1988 graduate of the University of Missouri’s College of Veterinary Medicine. He received his Bachelor’s degree in Animal Science from Rutgers University and studied Animal Nutrition at the Pennsylvania State University. Dr. Weiss has extensive experience in emergency medicine & surgery, soft tissue & orthopedic surgery, ultrasound and endoscopy. His experience extends beyond dogs and cats to all exotic pets. He has been featured in People Magazine and Woman’s Day and was selected as one of the Delaware Valley’s “23 Great Vets” by Philadelphia Magazine. He has also been featured on Animal Planet, Extra and American Journal TV shows, as well as Good Day Philadelphia.

He has two Australian Shepherds, a cat, and several parrots.

Schedule an appointment with Dr. Weiss

Currently, pets on regular and high doses of medications with antioxidant behavior including a L-Tyroxine and 4 drugs treating anti-anxiety, pain, seizure, or aggression or those dogs with dry mouths are not good candidates for Vet-Tab. The app will work when you are wifi connected on most iPhone and Androids with operating systems of 6 and higher. Contact us with questions at [email protected].